Libra is the month of marriage, partnership, sharing, and giving. Libra is the 7th sign of the zodiac and the 7th house of marriage in astrology. Libras strive for balance, idolize harmony, dislike discord, and hate confrontation. They’re the best negotiators of all types. Famous for having a hard time deciding where and what to eat or what to wear, Libras can be very decisive when it really matters. Most Libras prefer to be frank and direct, but haven’t figured out how to be liked for it. Even when they’re aggressive, indirect, or vague, they manage to get their way. Many tread the thin line between ethics and honesty. Maybe they know something important that could kill a deal or make a task harder for themselves, but fail to mention it. Some Libras serve their clients by wielding logic, tact, and diplomacy like Samurai Swordsmen. Athena’s mighty sword is brandished with icy detachment. Legal, political, publishing, marketing, public relations, higher education, and entertainment fields are burgeoning with Libra types. 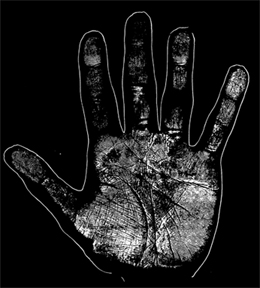 All Thinking types have square palms and long fingers. Many Libras have long straight unobstructed headlines that fork at their end near the percussion of the hand. They see every side of a situation. Straight and strong long pinkie fingers enhance communication. Dominant bottom and middle phalanges are favorable for commerce, banking, and real estate, while a long top phalanx is better for public speaking, journalism, and law. Blended with strong index fingers, you’ve got ambitious hardworking managers and powerful leaders. A wide separation between head and life lines increases personal initiative and spontaneity and reveals its owner really doesn’t care what others think of them. Some Libras are blinded by their desire and need to get their way. Trying to change a Libra’s mind is like playing mental monopoly. Be direct and make good sense.

Most healthy Libra types have strong handshakes and firm pink elastic skin. Long graceful heart lines extend from under the pinkie to the base of the index finger, symbolizing sentimentality and romance. Vertical lines on the ball of the thumb within the life line are soul commitments to family and friends. Libras are idealistic, romantic, and refined. Aesthetics are important to them. You’ll see Libra business types in chic designer clothing taking clients out to trendy restaurants.

Athena is my favorite Libra archetype. Greek Goddess of Wisdom and Justice, Athena rules the strategic thinking required in battle. Heroes like Odysseus (Libra) and Achilles (Aries) worshiped her. Often pictured as a handsome Goddess in battle armor, Athena holds a shield (Intuition) in one hand and a sword or spear (Thinking) in the other. She discards emotion to think with crystal clarity. In Libra, Athena holds the scales of justice and has an owl (Wisdom) on her shoulder. Real palmistry story about my relationship with an Athena type who I call ‘Athen’.

As a Libra, Truman Capote innately understood how easy it is to manipulate truth and the legal system. “Even an attorney of moderate talent can postpone doomsday year after year, for the system of appeals that pervades American jurisprudence amounts to a legalistic wheel of fortune, a game of chance, somewhat fixed in favor of the criminal, that the participants play interminably.” In Cold Blood

Scott is a Cardinal Thinking type. His Sun, Moon, Mars, and Jupiter are in the sign of Libra. That’s a lot of Libra. Scott has Scorpio rising and three planets in Scorpio. That’s a lot of fixity in the Feeling department. Scott is head ruled, but soft hearted. Much of his emotional growth can be attributed to his partner Lisa, who is a Cardinal Feeling type. Her Sun, Venus, and Uranus are in Cancer. She’s heart ruled, but also a strategic thinker. She has to in order to partner well with Scott. Scott and Lisa balance each other beautifully. Scott’s strong, firm, hardworking hands have designed and built sustainable housing, planted and tended bountiful gardens, and nourished community. Scott is also a Tai Chi master, baker, musician, song writer, and friend. www.pompanuck.org. 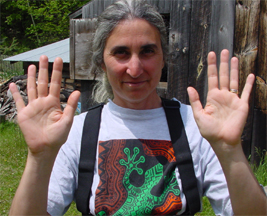 Susan was born on the same day and year as Scott. She has the same planets at the same degrees. You’d think their hands would be very similar, but they’re very different. Susan has Capricorn (Cardinal) rising. Observe the separation between her head and life line. Susan has long index fingers. She’s ambitious, but in a very different way than Scott. Notice how the fingers on her right (dominant) hand lean towards the index finger. As a giver, she has traversed much of the Third World with her loving partner Orin, helping less fortunate people have better lives. Her communication and language skills are refined. Susan sings in a chorale, her wonderful voice her instrument. She’s a great documentary photographer (all my website photos), gardener, musician, and friend.

My Cousin Richie, Libra extraordinaire, philosopher, sculptor, and inventor; created Tangle, The Infinite Sculpture (designer series of interactive, interlocking, plastic elbows). Our mothers were sisters. We share the ancestral “happiness”, and “seeker” genes. I once said to Richie, “If you put the same religious fervor into saving the world as you have into plastic elbows, we’d be saved”. He replied, “I am saving the world, one Tangle at a time” He meant it. 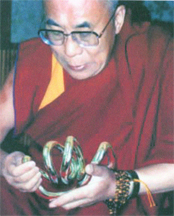 Richie has sold tens of millions of Tangles worldwide. I ran into a mutual friend on the streets of NYC who said he visited a monastery in Tibet and saw a picture of the Dalai Lama with a chrome Tangle in his lap. I wasn’t surprised. When I visited Richie at his gift show booth in NYC, he was talking with a very conservative buyer from Wal-Mart. I leaned closer to overhear what he was saying, “Let me show you the only product in this show worth more than money”.

The hardest task in reading hands is learning to judge hands. One person’s long, rectangular, and firm assessment can be another’s short, square, and soft appraisal. Rigorous practice is necessary to learn to observe and judge hands. Few of us are pure types. You may look at Cousin Richie’s fingers and see them as too short for a thinking type. I admit that if I didn’t know Richie, I may have seen his fingers differently, but the opposition in his symbolism is very powerful. Knowing Richie’s astrology and behavior has influenced how I see his hands. Dominant Libra opposes Aries as autumn opposes spring. Odysseus’s strategy fanned the flames of Jason’s passion on his quest for the Golden Fleece. Astute planning still fans the flames of passion in the 21st Century.

My brother Gary has a Pisces sun, a mutable feeling type. With Libra hands, he behaves more like a cardinal thinking type. Gary is a geriatric psychiatrist. I threatened to become one of his craziest patients, but then as a Gemini, I decided not to get old. Gary’s Libra temperament gracefully deals with the most stressful situations. Pisces gives Gary the ability to have a natural empathy and intuition that many Libras lack. Gary is a great psychiatrist, husband, father, brother, son, and friend.

You don’t have to be an expert palmist to see certain truths in hands. When the end of a heart line dips down to touch the beginning of a headline, it’s unlikely a person will verbalize their deeper feelings, especially negative emotions. A rational mind controls a very impressionable heart. Add a short index finger and that will wreak havoc on a person’s self-esteem. It makes trying to offer advice to anyone with that combination a challenge for someone who wants to help. When you discuss personal history, you may learn a parent was emotionally or physically absent during the person’s formative years. 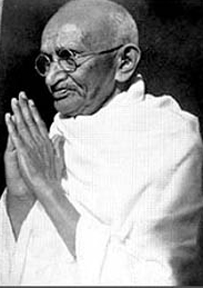 One highly principled Libra was Mohandas Gandhi, lawyer, political, spiritual leader, and civil rights champion in early twentieth century India. He promoted non-violent disobedience and began India’s freedom movement. Gandhi must have had huge empathy and unshakable conviction to overcome the inertia of his short index fingers. Dennis Kucinich, a Libra, and a long shot in the 2004 presidential campaign, promised to make non-violence a priority by establishing a “Department of Peace”. Russian president Vladimir Putin is a Libra. He was nominated for the 2014 Nobel Peace Prize.

Bruce Springstein “The Boss”, has captivated masses for 30+ years with his charisma. John Lennon and Jim Henson were also Libras who mesmerized masses of followers. “Imagine there’s no country, / It isn’t hard to do. / Nothing to kill or die for, / And no religion, too. / Imagine all the people / Living life in peace”  John Lennon (1940-1980)

Sleeping Beauty symbolizes the search for self through other. Prince Charming (Aries) rescues SB from her hundred year sleep. He bestows a magic kiss that enables her to awaken and they ride off into the sunset to live happily ever after. Many Libras have unrealistic expectations of relationships that end up disappointing them in reality. I remind them that there are many more frogs and beasts than princes. Libras want to be married. A marriage license may be a legally binding contract, but it doesn’t guarantee love. 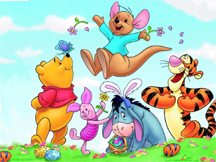 Winnie the Pooh (Libra) tries to find balance in his life by reasoning “think, think, think”. He always manages to get a pot full of honey for himself. Christopher Robin (Aquarius) knows what’s best for everyone. Winnie lives in the hundred-acre wood with his friends, Piglet (Gemini), Rabbit (Virgo), Roo (Saggitarius), Tigger (Leo), and Eeyore (Capricorn).

Everyone has Libra, Venus, and a 7th house in their astrological symbolism. Deep down, we know what’s honest, true, and fair. Most of us have ethical and moral values and boundaries. We also know right from wrong and fear the consequences of our betrayals. It’s too easy to analyze, rationalize, and compartmentalize our bad habits and behaviors. “Laws keep honest people honest”, “Locks keep honest people out”, and “Contracts are only as good as the people who sign them” are aphorisms that describe Libra.

1 thought on “Libra – Search for Other”