President Barack Obama is an Intuitive type.  Anyone with long rectangular palms and comparatively short fingers falls into this category. These highly spirited, enthusiastic individuals dislike details, need to grasp the whole picture, pride themselves on their honesty, and require a lot of freedom to express themselves naturally. As extroverted, very busy, objective, independent thinkers, they get easily bored when life gets mundane or routine. They need to stay inspired and passionate while cultivating clear vision and enduring patience. They’re often accused of being opinionated because their point of view is so very important. Communicating clearly and effectively is a must.

Barack Obama is a Pioneer. The Pioneer is the most courageous and adventurous of all twelve basic character types. Pioneers help us get over inertia. Hands of pure types sport rectangular palms and short fingers, a pink puffy fleshy bump where the thumb meets the hand, and a full and well-developed percussion (bulging side of hand under the pinky finger). The consistency of the hands is firm and the skin is elastic (quickly returns to normal when pushed or pulled). There is an overall pinkish or reddish coloration to hands. Many thriving executives, military leaders, soldiers, policemen, firemen, salesmen, surgeons, barbers, and butchers are Pioneers. 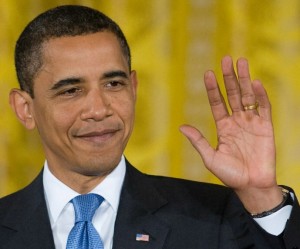 Barack’s hands are a bit narrower and less meaty than most physical type warriors. He’s a warrior of ideas and ideals. He’s independent, freedom loving, energetic, and enthusiastic. When inspired, he takes calculated risks. His passion is contagious and his optimism eternal. He never runs out of doors to knock on because he doesn’t take rejection personally. As a naturally rebellious type, he detests bureaucracy. It’s ironic that he’s in charge of the biggest bureaucracy in the free world. He’s a natural hero and a great crusader for the right cause, which he will campaign relentlessly for until he realizes his aspirations. Barack’s head and lifelines are separated at their beginnings where his thumb meets the hand. Combined with the little crook in the top phalange of his middle finger, he requires a lot of personal space to sort out his thoughts. Barack has a highly developed sense of responsibility. He’ll always choose his tasks over his recreation. Barack’s pinky appears to have the smallest phalange at the bottom of that finger. He’s not motivated by money. Freedom, family, and good causes inspire him.

In general, Barack is a naturally healthy type. The clear quality of his basic lines reveals a healthy clarity in his thinking and feelings. Barack’s heart line swings up from the percussion of his hand to the space between his index and middle fingers. He’s passionate, but also very practical about his feelings. Barack’s headline swings down toward the heel of his hand and shows a healthy balance between his creativity and objectivity. He’s got both creative imagination and clarity of vision. His fate line travels all the way from the bottom of his palm to the base of his middle finger. Barack has worked hard and remained focused on his goals for his whole life since he was a small child. Lines in the ball of Barack’s thumb parallel to his lifeline reveal a true friend to a select group who have earned his trust over time. Despite his unpopularity with Republicans, our founding fathers would be proud to know that their country is in Barack’s very competent hands.